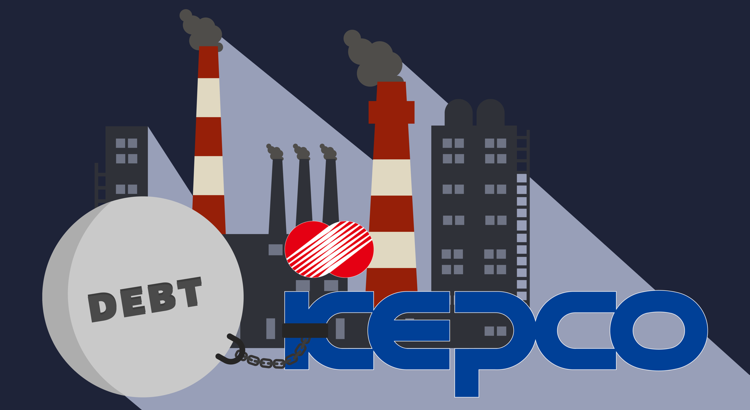 If this trend continues, KEPCO’s annual bond issuance is expected to reach USD 32.8 billion. Meanwhile, KEPCO's expected operating loss for the first quarter of 2022 is between USD 3.9 to 4.7 billion, leading to a predicted annual loss of USD 16.4 billion. The company’s actual operation loss in February 2022 reached a record high of USD 1.5 billion.

Concerns over KEPCO's vicious cycle of bond debt facing limitations are escalating. With the South Korean government's decision to freeze the electricity rate for Q1 of 2022 amid rising inflation, KEPCO is financing most of its necessary funds to supply electricity below actual costs.

Aside from controversies around KEPCO’s electricity pricing, KEPCO’s high dependency on fossil fuel assets and soaring fossil fuel prices are found to be the leading causes of exacerbating financial instabilities. In stark contrast to the 1.5°C pathway, and at a high financial risk, KEPCO is still developing fossil fuel-based power generation facilities at home and abroad.

Despite South Korea being the first among the ‘big 3’ Asian coal financiers – China, South Korea, and Japan – to announce a moratorium on new public financial support for overseas coal-fired power investments in April 2021, KEPCO did not retract its plans to build the 2,000MW Jawa 9 & 10 in Indonesia and 1,200MW Vung Ang 2 in Vietnam. The same year, South Korea and KEPCO also added another 3.1GW of newly built coal power plants for operation, further regressing the country’s climate ambition. In fact, according to the recent coal plant capacity report by Global Energy Monitor (GEM) and nine other international environmental groups, South Korea was found to have the world’s third-largest operating coal capacity expansion in 2021.

This backwards expansion of coal power plants has all been possible through debt financing. Through purchasing corporate bonds issued by GENCOs2, which are KEPCO’s power generation subsidiaries, and private coal power project companies such as Samcheok Blue Power (the last coal power project in South Korea), domestic financial institutions funneled about USD 23 billion (KRW 25 trillion) into coal in 2020.

What is noteworthy, though, is that the shunning of coal bonds like those of KEPCO’s, is already taking place.  As of February 2021, South Korea’s top asset management companies, accounting for nearly 90% of the Korean bond market, committed to not invest in bonds supporting the remaining construction of the 2,100MW Samcheok Blue Power project. In December 2020, APG, a Dutch pension investment company, sold all its stake and bonds in KEPCO due to its coal expansion. KEPCO's subsidiaries, too, are facing difficulties in raising cash through bond issuance, due to investors’ coal divestment trends and surging raw material costs.

Even when KEPCO’s USD 500 million of green bonds were oversubscribed in June 2020, the world’s leading ESG investors, like Allianz SE and BlackRock INC, opted out, unconvinced with KEPCO’s high coal ambition revealed in its pipeline. Not surprisingly, a few weeks after the issuance of those green bonds, KEPCO announced its investment plans in Jawa 9 & 10 and Vung Ang 2.

With mounting concerns both at home and abroad over its growing financial vulnerabilities and climate risks, it is critical that KEPCO and GENCOs cut their reliance on highly volatile fossil fuels.

Unless KEPCO revamps its current portfolio, which in every perspective reveals that KEPCO is essentially a coal asset-based company, and announces an earlier coal phase-out date, its continued bond issuance will be understood as a desperation under its coal addiction. Investors may cut ties with KEPCO before the company cuts ties with fossil fuels, as the remaining investment in KEPCO will be a direct negation of the investors’ own climate efforts.